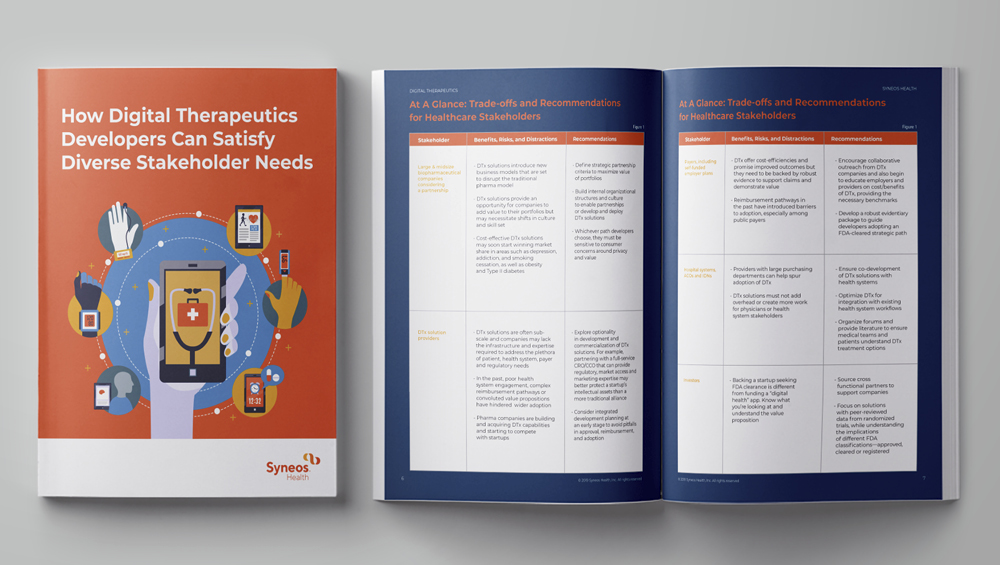 Short on time? Check out the Executive Summary below.

If there are lingering doubts about the viability or market potential of digital therapeutics (DTx), recent moves by the U.S. Food & Drug Administration should lay them to rest. In December, Pear Therapeutics and its partner, Novartis’ Sandoz unit, received FDA clearance for reSET-O™, a prescription-only mobile medical app that helps patients with opioid use disorder remain in outpatient treatment programs. The same month, with support from regulators, the ECG app on the Apple Watch 4 became the first direct-to-consumer product that can notify users of an irregular heart rhythm.

Now, the FDA seems poised to weave DTx into the fabric of regulatory decision-making. In December, the agency released a new framework for the use of real world evidence (RWE) in clinical studies, which highlights the desire to capture patient-generated data on mobile devices and in-home-use settings. Commissioner Scott Gottlieb says the new RWE program will encourage exploration of tools such as wearables and mobile technology that will advance new models for clinical research. In speeches, FDA officials have also provided updates on a novel pilot program that may lead to pre-certification for DTx developers, whose apps will be paired with, or replace, FDA-approved medical treatments.

Digital therapeutics “have the potential to fundamentally change how patients interact with their therapies,” said Sandoz CEO Richard Francis in a press release announcing the new reSET-O™ app. Expressing what many in the industry feel, he said apps that diagnose, track, or prevent illnesses could be “the next chapter of medical innovation.” At the same time, however, DTx helps energize an ongoing trend with large and complex implications for traditional healthcare players. The devices and apps may fuel the democratization of healthcare by further empowering consumers and, potentially, disintermediating traditional players.

The DTx market, conservatively defined, is currently expanding at 64% CAGR and could be worth nearly half a billion U.S. dollars by 2021. But, to reach its full potential, Syneos Health believes DTx developers must learn from the setbacks encountered by both life sciences and technology companies in recent years—especially in areas of consumer trust. These include flawed privacy policies, obscure value propositions, pricing missteps, convoluted reimbursement pathways, and failure on the part of many stakeholders to reduce complexity on behalf of the user. Going forward, DTx developers must foster empathy for patients, physicians, health systems and other stakeholders.

Before exploring how challenges in diverse stakeholder needs pose risks to the nascent DTx ecosystem, it’s helpful to understand the remarkable confluence of regulatory, technological, social and economic conditions behind our estimates for market growth. These include:

Akili Interactive raised $68 million in equity capital in 2018 after meeting its primary endpoint in a multi-center, randomized controlled trial showing its video game app, AKL-T01, improved attention in children with ADHD. The company has its eye on autism, depression, Alzheimer’s disease, and traumatic brain injury. And Click Therapeutics, creator of a smoking cessation app, in July announced a $17 million funding round led by its partner, Sanofi. Click will also seek FDA clearance for apps treating depression and insomnia.

Over the next five years obesity and diabetes and other chronic conditions will continue to draw the attention of DTx developers, along with opportunities to digitally track and manage health with a holistic approach that includes physical activity and eating habits. A second, promising target for DTx developers is disease prevention—especially for respiratory, cardiovascular and CNS conditions. The latter is hardly surprising given the lack of effective new treatments for Alzheimer’s disease and Parkinson’s disease and the exit of many large pharma companies from the CNS space. DTx solutions employing cognitive behavioral therapy (CBT), behavioral science, game-style rewards and other strategies for focusing or flexing the brain may help fill the void, assuming developers offer robust clinical evidence to support their assertions.

Against this backdrop, partnerships bridging biopharma and information technology are often in the limelight, and the trend will accelerate. This fall, Otsuka Pharmaceutical and Proteus Digital Health expanded their global alliance around one such drugdevice hybrid, ABILIFY MYCITE® . Combining aripiprazle (Abilify), an atypical antipsychotic, with a sensor and software, the companies created a smart pill that can track ingestion and transmit the data to patients and doctors via a smartphone app. The FDA approved the drug-ingestion functions of the app in November 2017. This partnership illustrates how large players can provide startups with the infrastructure and resources to support scaling and wider adoption, a challenge plaguing many of the smaller companies and a systemic issue in the fragmented landscape of healthcare solutions.

For each healthcare stakeholder--startups, traditional pharma, patients/consumers, physicians, health systems, and investors—DTx brings a complex mix of risks and opportunities. For commercial organizations evaluating partnership options, the tradeoffs are particularly vivid. For example, pharma partners may bring scale to a small innovator, but the smaller player may be giving away value. For pharma, such partnerships generally encourage innovation but can also expose the company to unanticipated changes in culture or ways of working. 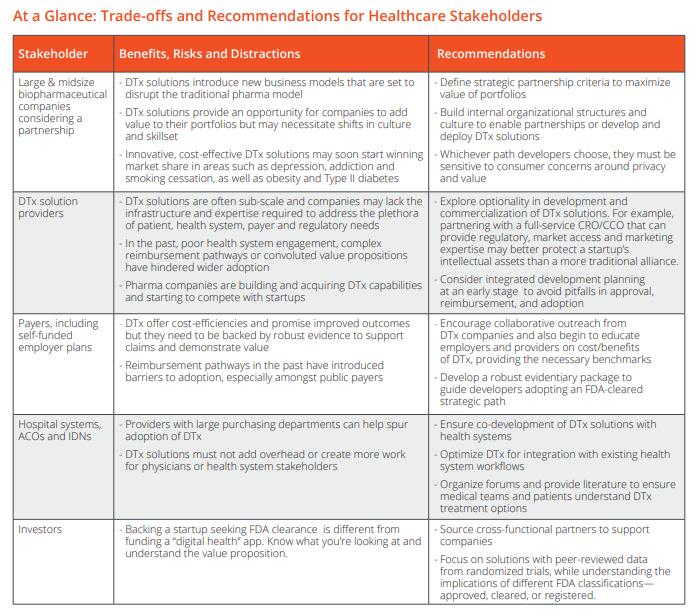 Fill out the form below to download your requested Insights Hub Article.